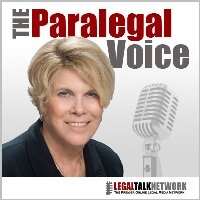 Despite US notions of innocence until proven guilty beyond a reasonable doubt, many innocent people have been sent to prison for lengthy to life sentences.

Common reasons for these wrongful convictions are faulty eyewitness accounts, use of “junk” science as evidence, and informants with conflicts of interest.

On this episode of The Paralegal Voice, I interview Professor Marla Mitchell-Cichon from the Cooley Innocence Project at the Thomas M. Cooley Law School. We discuss the Innocence Project and the Post Conviction DNA Testing Statutes that opened the door for exoneration of the innocent around the country. We also discover how the convicted innocent have less help than guilty parolees upon their release.

Tune in to learn more about coerced confessions, bad actors who cause false convictions, and what remedies the wrongfully convicted have.

Professor Marla Mitchell-Cichon began her teaching career in 1986, following service as a public defender. Her clinical teaching includes post-conviction, criminal defense, general civil practice, elder law and externship. Professor Mitchell began teaching in Cooley’s Innocence Project in 2002. She serves as the project’s co-director. In 2006, Professor Mitchell received the Justice For All award from the Criminal Defense Attorneys of Michigan for her Innocence Project work. Professor Mitchell’s litigation experience includes practicing before the U.S. Court of Appeals for the Sixth Circuit, the Ohio Supreme Court, and trial and appellate courts in Ohio and Michigan. Professor Mitchell’s publications are in the areas of criminal law, elder law, ethics, and clinical teaching.

Special thanks to our sponsors, NALA and ServeNow.